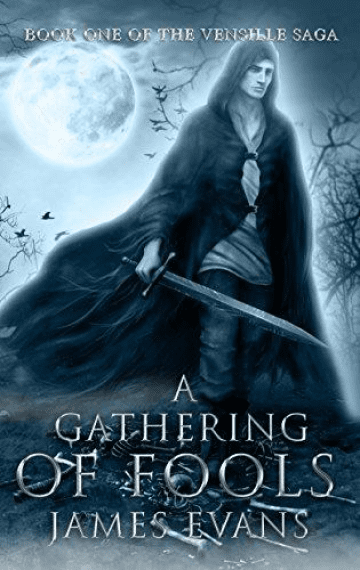 A loyal soldier betrayed. A kingdom full of enemies. Can he clear his name and unchain his magic before the Empire cuts him down?

Marrinek lost everything in an instant. Framed for a crime he didn’t commit, the faithful courtier spent two years in prison before a sudden, near-lethal escape. Hunted by his own former allies, the double-crossed magic user journeys to reunite with his wife and get revenge on those who deceived him.

Hiding amongst devious criminals in a seedy underworld, Marrinek unveils a kingdom-wide conspiracy that goes far beyond his own imprisonment. To save all he holds dear and against impossible odds, the soldier must lift the haze from his magic and expose the plot before his enemies strike a fatal blow.

A Gathering of Fools is the first book in the Vensille Saga epic fantasy series. If you like magic and mayhem, dark violence, and heroic redemption, then you’ll love James Evans’ immersive world.

Buy A Gathering of Fools to plot a magical revenge today!