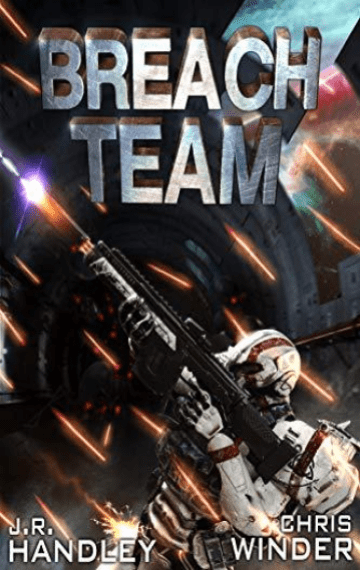 Survival means fighting through the unknown.

Corporal John Harden is a decorated soldier living in the shadow of his father, a celebrated war hero… Determined to make his own way In the galaxy, John develops a reputation as a brawler serving aboard the DFS Hughes.

A rescue beacon brings John and his fellow Marines to a cargo ship thought lost two decades ago… and the heavily damaged alien vessel of an unknown species that took it down. With the brass demanding details and apparent survivors begging for aid, John’s team boards the derelict ships, vowing to leave no man behind.

On board, nightmares become reality as John and his team are separated and left behind, presumed to be killed in action. Assaulted on all sides by mysterious alien tech, John gets the chance to finally prove himself worth being his father’s son—if he can survive the onslaught.

The way home is in sight, and John won’t back down from the fight, though a determined enemy will make him pay for every inch. Breach Team is a non-stop action thrill ride with fast-paced warfare written by two veterans. Join the fight by getting your copy today!