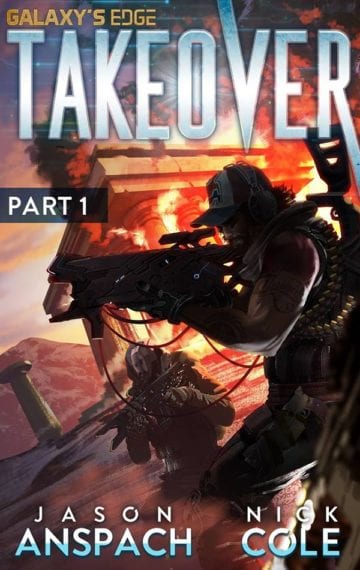 Carter, a former legionnaire turned private contractor, signed up for private employment on Kublar hoping that the hefty salary would be what he needed to navigate a galaxy reborn. Serving as a mercenary team leader, Carter is expected to use his skills learned in the Legion to lead a cadre of hardened professional soldiers in one of the most dangerous and hostile planets in galaxy’s edge.

Meanwhile, Jack Bowie, a Navy spy with nowhere to turn, signs up to work for a shadowy, connected entity and joins a deadly game of intrigue, mixing with drug kingpins and corrupt leaders in Kublar’s largest coastal city. Every day is a fight for his life as he navigates a cesspool where everyone from displaced Republic politicians to alien fanatics and local tribal warlords are working to take control of Kublar.

Credits solve a lot of problems. If you live long enough to spend them.

Takeover is an epic, multi-part serial set in the Galaxy’s Edge universe that bridges the gap between Galaxy’s Edge Season One and Season Two!